I did not eat breakfast that morning and as the clock hit 1pm strangers around me could hear my stomach retaliate; fortunately, I just happened to be attending my very first Press Release Event at Altopalato culinary school that day. My employers, Encanto Public Relations Agency, were organizing the cooking class event and sent me into the field for the first time. My first thought: I am working abroad in Italy for the Italian food; I don’t know about these Korean-Italian dishes. Despite by initial hesitation, adventure awaited me at the widely renowned culinary class and turning away would be shameful.
Upon first arrival, I was directed to a room with a long table that filled the entire room. It was decorated with silver platters of Korean spices and ingredients. Elegance graced the room, seen in the plush chairs and complimentarily Makgeolli, a yellow tinted drink made of wine, prune juice, and tea, handed out by the kindest woman. Toni Sarcina, professional food critic, spoke to the audience about his goal to spread Korean culture throughout the world by integrating it with lovely local cultures. He explained how he uses Korean ingredients to compliment Italian dishes in a way that does not over power the dish but adds flavor that everyone can enjoy. 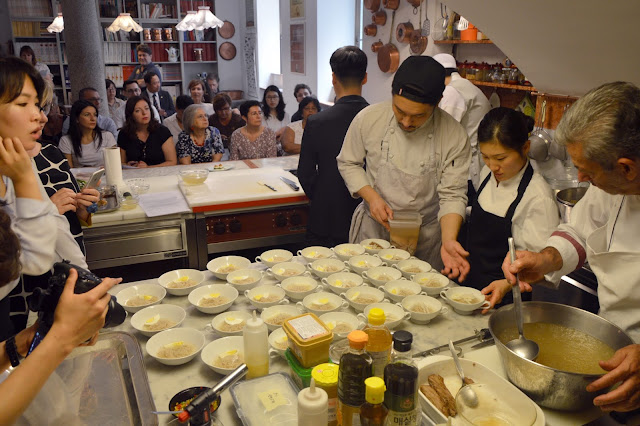 As the words concluded, we were guided downstairs to a copper coated, stunning kitchen. I could not keep my eyes off the intriguing curve of the celling and beautiful marble countertops. Promptly, The Korean chef took his place behind the cutting board. He walked us through the cooking process on each dish step by step as assistants in the back worked frivolous to create dozens of sample platers.
When the silver trays entered the crowd with Tofu con Kimchi bianco, I heard my stomach call out for it. My eyes devoured the appealing dish, but I was timid to try it. A Korean dish, would I even like it? Journalists and influencers around me ate every last piece of the dish and handed back empty plates with a satisfied smile. It looked like I was missing out, I wasn’t going to let it happen again.
Following along the food process of the Mulnaengmyeon was making me anxious to try it. Finally, the silver platers came around again and I was handed a bowl of my own. At first, I was skeptical, pushed it around a little with my fork like a kindergarten with vegetables. But my stomach demanded in desperation that I take a bite and I couldn’t say no. I rap the noodles around my fork and go in for it. When the stark cold of the dish hits my tongue, my eyes go wide. The chef explains that the dish is cooled in ice before served to deliver that unique sensation. Although I had never consumed such cold noodles before, my stomach was strangely pleased. 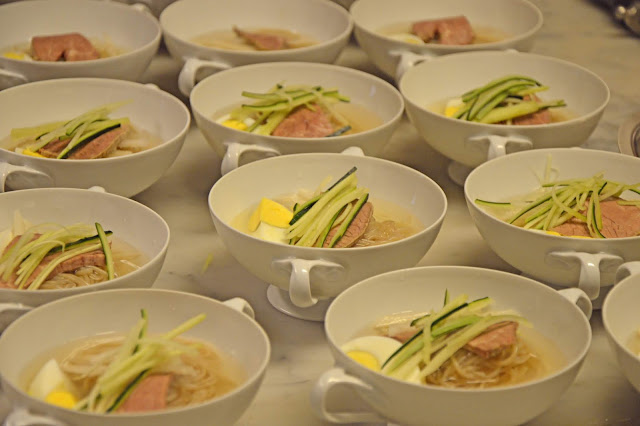 When the chef explained the next dish was a bacon-like pork, I really started to get excited. As soon as the dish was in my hands, the Maliale brasato e grigliato was in my mouth. Unconsciously, a smiled spread across my face as I closed my eyes to appreciate the flavors. The meat was delicious and coated with the most wonderful Korean spices. Who knew I could like Korean food? I didn’t! I enjoyed it so much I took a second dish hoping no one noticed. 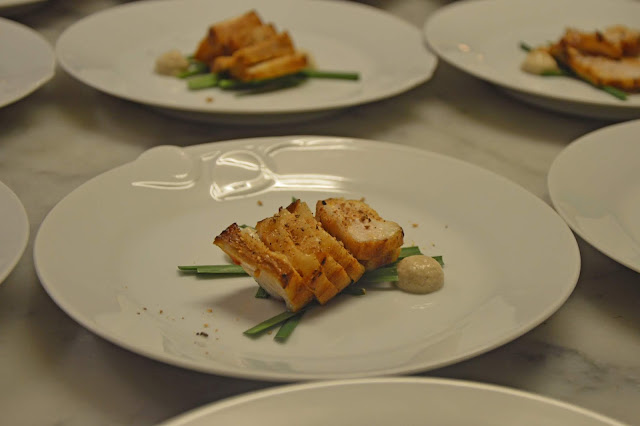 The audience applauded the Korean chef’s presentation and dishes as we awaited the next chef. It was now time for the Italian chef to demonstrate how to use Korean ingredients to enhance tradition Italian dishes. Italian food being my favorite in the whole world, I got defensive against their claim that they could make it better.
The Italian chef begins cooking the pasta and I already knew I am going to love the dish. I didn’t know how much until I was tasting it. The Korean ingredients mixed into the Pasta con ssamjang e olio di sesamo enhanced the taste of the noodles in an unimaginable way. I finished mine so fast I found myself craving a whole serving… or two! The dish won my heart and is now on my To Do List to bring my friends back there to try it.
The event was concluded with Manzo aglio ortaggi con salsa di prugne e olio di sesamo. The delicious beef was cooked perfectly and displayed like a work of art on my plate. I began resenting these dishes for being so tiny because my hungry stomach wanted more. The Korean elements added flavor but did not take away from my beloved Italian food taste.