Italian journalists are becoming increasingly more present on social media, but the road to multimediality is still long

“Audit Italian Press”, a quality analysis carried out by the Ixè Institute with the support of Encanto Public Relations, the first picture of how journalists use social media in their work.
The preview of the research, which will be made available in December to the 18,000 members of the Giornalistisocial.it portal, analyses 50 cases in Italy (which we have compared to an American and Canadian sample group collected by Cision) from which it emerges that the journalists interviewed use social media primarily to promote their own work (83% compared to 73% of North Americans) and for networking (54% compared to 73%). In second place is the use of social networks for monitoring public opinion (52% compared to 64%), followed by searching for stories (41% compared to 52%) and, lastly, for research and verification (41%).
The most used platforms are Facebook (87%), YouTube (70%) and Twitter (67%), while significant growth is expected especially for Instagram and Snapchat. According to the Cision report, Periscope will take over, above all because it allows access to live streaming when other means are not available.
Half (50%) of journalists interviewed consider social media to be a source of reliable information with most trust given to YouTube, Instagram (a predominantly visual platform) and Twitter. 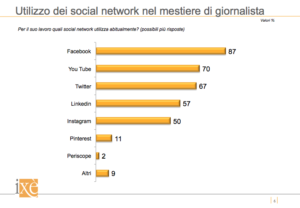 They almost unequivocally claimed that they post verified and comprehensive news (91%) rather than pursuing exclusive stories in order to be the first. Americans too share this position even though a minor (yet more significant than in Italy) percentage prefers speed to reliability.
Images and videos used by professionals are for the most part taken from online (paid or free) image banks, followed by internal sources (of the paper of periodical in question) and, lastly, by self-produced material. A total of 25% of journalists state that they use material posted on social networks.
Andrea Tortelli, journalist and founder of GiornalistiSocial, the largest Italian community of journalists on social media with over 26,000 members, when asked about this data, explained:

“The position of this profession is decidedly complex and – as emerges from the report – there are many contradictions in the perception of the social media phenomenon: on the one hand there is growing awareness that social media is increasingly important as a promotional and self-promoting tool, on the other hand very few have realised that paper can’t represent the future, indeed it no longer even represents the present. In this context, the most conservative segment is, in my opinion, represented by those who still work as editorial staff for a newspaper or periodical and look at the new digital, mobile and social network scenario with diffidence, maintaining a more traditional concept of their profession. Then there are those who have either lost, or will never have, the security of a national journalism contract, who see their work in a more open, but sometimes contradictory, manner being aware that – as also demonstrated in a research carried out by Censis – social media is today the primary source of information for almost all Italians. This contrast is evident even in the online spaces that I manage – such as Giornalisti italiani su Facebook with its 18,000 members – where the debate is so heated that that, for certain topics, it comes close to descending into a verbal brawl”.

Furthermore, both reports highlight the dominating trend in the editorial industry with regards to a smartphone compatibility with a periodical’s format (54%), with a firm conviction that the public accesses news on mobile devices. Hence the need to offer multimedia content (41%), to reach the “always on” consumer that requires multiple channels.
On the future of advertising, Italians see the future in “native adv” form while Americans are, in 47% of cases, neutral (and 28% negative). The relationship between journalists and communication professionals has not changed for 48% of those interviewed who continue to believe in equal measure, while for Americans nothing has changed for 66% of those interviewed. In Italy 25% of journalists claim they trust professionals less than they used to whereas 20% say their trust has increased.
With regards to material, preference is still given to the traditional press release, followed by photographs/videos/surveys, data and analyses that can easily transformed into news items. E-mail remains the preferred means of communication since it provides a complete and comprehensive text that the journalist can readily access.
A total of 43% of journalists declare that they, occasionally, feel obsolete and not in step with the times. Strangely enough this fact doesn’t seem to be age-related. Probably confidence in their profession enables the long-standing journalist to feel effectual despite and regardless of the speed of technological innovation that is inevitably transforming the profession.